Two Counties in I-77 Region Top Performers for Talent Attraction

Economic development is saturated with accolades and rankings. Best quality of life, Top states for business, Where are millennials moving…the list is seemingly endless with new content hitting feeds and inboxes every day. The exponential growth rate of this content, exaggerated by media companies recognizing the clicks, shares, and page views these rankings generate, creates a challenge to identify rankings that provide meaningful insight into complex economic data. One metric that stands out in this regard is the Talent Attraction Scorecard from economic and workforce data solution provider, Emsi.

As the unemployment rates shrink to record low levels across the US, companies in growth mode will be attracted to communities that offer a dynamic, skilled, and growing labor force. Therefore, it is vital for counties and regions to benchmark their competitiveness in talent attraction efforts against their peers. To create this benchmark, Emsi grouped US counties by population into “Large counties,” those with 100,000+ residents, and “Small Counties,” those with 5,000 up to 99,999 residents. Next, the analysis aggregated multiple relevant data points, including domestic migration and population trends, job growth rates and skilled workers, young talent attraction, and educational attainment trends. The resulting index value provides counties the ability to not only identify their own strengths or weaknesses, but additionally they can measure itself against their peers.

Shifting to the results, while the I-77 region fared well overall, York and Lancaster Counties stand out nationally.

It’s no surprise that the counties in the Charlotte metro area are top performers, benefiting from a region experiencing rapid economic growth coupled with South Carolina’s favorable business climate. York County is the second largest county in the Charlotte area with 10% of the region’s population and growing by 23 people every day. Similarly, Lancaster County is the 46th largest county in the Carolinas, but it’s population growth of 20% from 2010 – 2017 was the 4th fastest among both states.

“Charlotte is an obvious draw for talent and has been for many years, and our northern counties are an integral part of that marketplace, a work shed, as we call it in our space, of more than 1.2 million people,” said Rich Fletcher, the SC I-77 Alliance President and CEO. “The population of our northern counties has doubled in recent decades and we don’t see that slowing down anytime soon.”

The Scorecard’s analysis provides additional context. York County’s index value is ranked 40th nationally among the 140 “Large Counties,” however, its change since 2016 is impressive, leaping 65 spots in just three years.

Lancaster County’s group is even more competitive with almost 2,240 “Small Counties” and yet it is ranked 9th overall! Counties in the Top 10 for talent attraction across the United States clearly stand apart as communities that need to be evaluated by companies pursuing expansion plans. The chart below highlights its sustained momentum, rising 15 positions since 2016. Additionally, the full report details a primary component of Lancaster’s high ranking, the largest net migration increase among all “Small Counties” from 2015 – 2016. 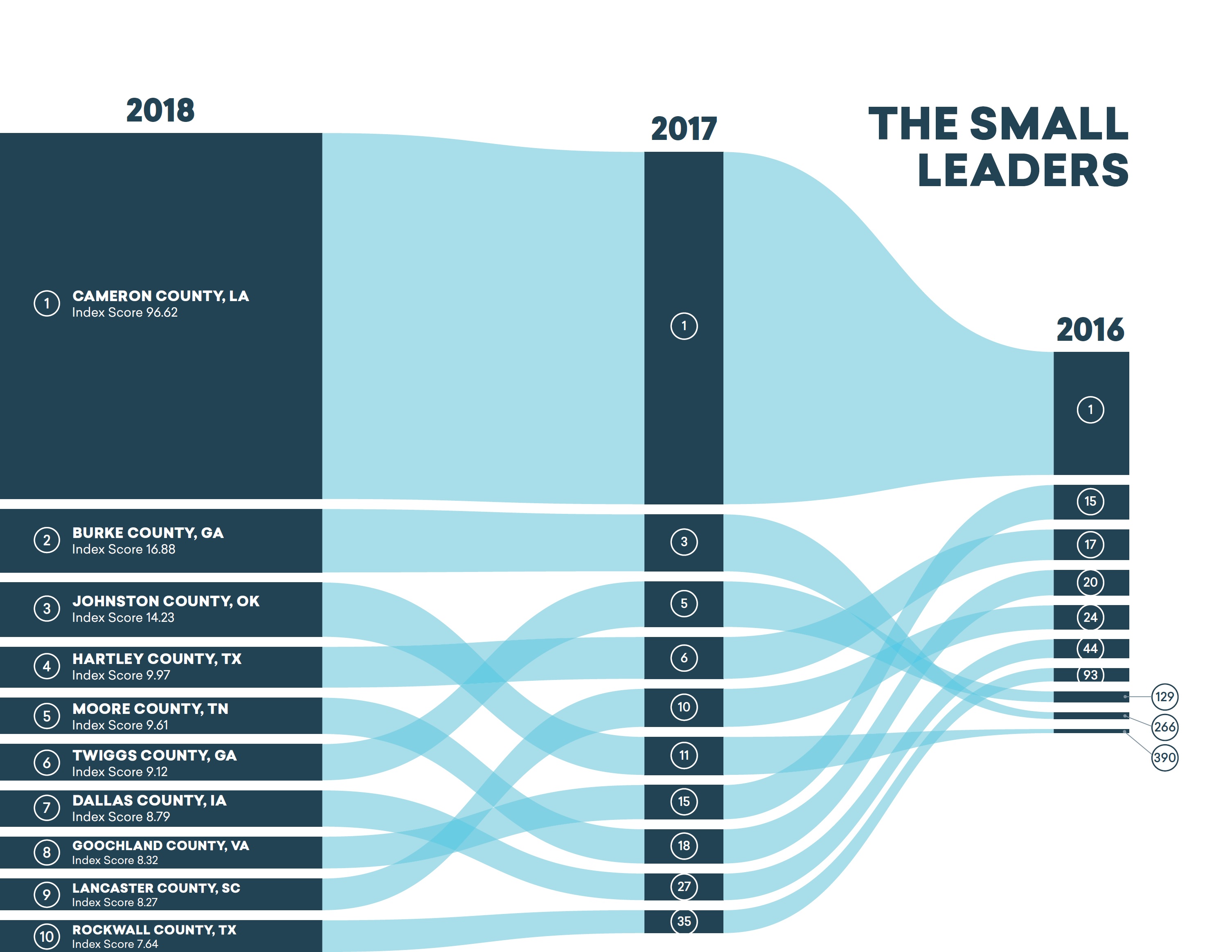 “The attributes that the Emsi study used to rank counties are those important to the companies we seek to recruit, and the growth we’ve seen in the Corridor speak to our communities’ success,” said Fletcher.  “I’m pleased but not surprised to see Mecklenburg and Lancaster counties as repeat top-ten performers.”

The full report can be found here