RICHBURG, S.C. – Gov. Henry McMaster and U.S. Sen. Lindsey Graham highlighted the power of collaboration, connection and communication on Wednesday, August 16, at the South Carolina I-77 Alliance’s third annual Economic Development Summit, which was held at the Gateway Conference Center in Chester County.

The key federal lawmaker and the state’s chief executive pointed to the alliance of economic developers from the corridor comprising York, Chester, Fairfield and Richland counties as an example of how to leverage the unique advantages the Palmetto State has in attracting new industries and the jobs they create.

“South Carolina is a place where with one or two phone calls you can get to someone who can get things done,” McMaster said. “It’s been that way for a long time.” That attitude has helped create incentives to locate here, which includes a robust technical college system, leading-edge research universities, business-friendly local and state governments, an outstanding port, growing interstate network, and most of all, the people.

“The main reason new companies come here is the people. We have right-to-work laws and a right-to-work attitude and spirit,” the governor said. “They see the people, they see what’s going on here, and they want to be a part of it.” McMaster said that just since he took office in January, there have been 79 projects announced in South Carolina, involving $3 billion in capital investment and 10,000 new jobs.

Graham, meanwhile, said he plans to help in Washington by pushing for legislation that will help show “we know how to say yes to business.” 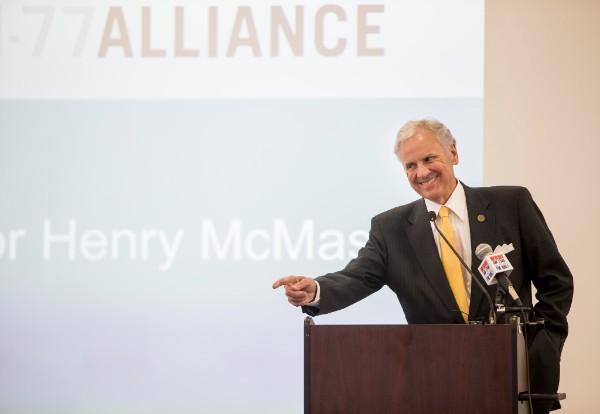 The Honorable Henry McMaster, Governor of South Carolina, speaking at the Third Annual South Carolina I-77 Alliance Summit on August 16, 2017, in Richburg, SC.

“There have been a lot of historic challenges in this part of the state because of the changes in the textile industry,” South Carolina’s senior senator said. “You’ve had to re-tool here and the Alliance is a brilliant way to help do that. Your vision is going to pay great dividends over time here and for all of South Carolina.”

The Alliance also gave a “sneak peek” of its rebranded logo and new website at the summit, which will be launched by the end of August.

“We were delighted to have two such strong advocates of growth and prosperity for all South Carolinians share their views and insights,” said Alliance President & CEO Rich Fletcher. “The Summit was a great way to share with our stakeholders and the community the Alliance’s vision for going forward within the next year.”

About South Carolina I-77 Alliance
Established by the counties’ economic development offices, the South Carolina I-77 Alliance is a nonprofit economic development organization that seeks to position and market Chester, Fairfield, Richland, and York Counties as a world-class business location to attract investment, high quality jobs, entrepreneurs, and professional talent along the I-77 corridor of South Carolina. For more information on the Alliance, contact Rich Fletcher at (803) 789-5010 or rich.fletcher@i77alliance.com.